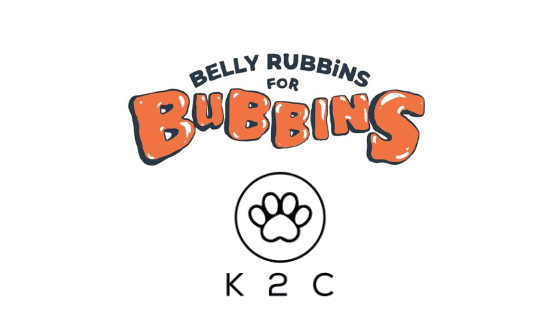 “We can spay, neuter, shelter, foster and adopt, but until we educate it won’t stop.”

So how did all of this come to fruition? Much like the Kennel to Couch founder, Kraus had his perspective on life changed forever after he and his wife adopted Gibbson, a 10 year-old pit bull with thyroid cancer. The rescue they adopted Gibbson from was just looking for someone to give him a good ending to his life, and instead Gibbson gave them a new perspective on theirs.

In the Fall of 2016, Gibbson was found wandering the streets of Newark, NJ. He was brought into the Associated Humane Societies Newark Branch on a stretcher due to having sustained “several injuries.” For several months the rescue sought a hospice foster for the sick senior pit bull, but the odds of finding him a home were slim. Although Jason was reluctant at first to adopt Gibbson given what he had heard about pit bulls, his wife Michelina assured him the mainstream narrative certainly was just that, a narrative, and not reality. It didn’t take long for Jason to fall in love with Gibbson, and Michelina’s assertion proved to be true beyond Jason’s wildest dreams. Gibbson, whom Jason and many others had judged a certain way based solely on his breed ended up sparking something inside of Jason. Gibbson showed him the meaning of unconditional love, forgiveness and the ability to live in the moment. It was obvious to Jason and Michelina that Gibbson had a rough life before he was found wandering the streets that day in 2016. His ears had been cut off, his teeth had been shaven down flat and his head, neck and body were riddled with scars from bite wounds and scratches. It was one night in particular when Gibbson was pancaked ontop of him, that Jason asked Michelina the question,

“how could anyone have done this to him”…

That’s when it dawned on Jason, “It’s all about education.” So Jason decided to write a children’s book. The book would provide children’s education (and for adults too!) on the all too common tale of a rescue dog’s harsh journey toward find a loving family. He wanted to highlight the never-ending positivity that exists in dogs and clearly paints the picture that Bubbins, like so many other dogs always believed that there was a loving family out there waiting for him. The Kraus’ are enriching children’s education with their sweet story that will tug on even the toughest heart strings.

Kennel to Couch is pleased to partner with the Bellie Rubbins team and is thrilled to announce you can purchase the Belly Rubbins for Bubbins book with an exclusive discount code KNL2COUCH that will grant you 10% off the paperback and hardcover versions. By purchasing this children’s book, THE HUMANE EDUCATION PROGRAM or any BUBBINS GEAR on this site you will be helping save future dogs by sharing Pit Bull education with future dog owners, the children. 51% of profits go to rescues/shelters.

Despite the successful launch of the book, the Kraus’ knew that more needed to be done. They knew that the kids who needed the story the most, would likely never hear it from their parents. So, Jason left his employment and began running Bubbins Humane Education Workshops in NY and NJ schools. Truly believing that the more you give, the more you get; To date, Jason and Michelina have visited over 20 schools and educated over 5,000 children. They’ve also donated $4,000 to rescue organizations and 800 books, 400 of those books went to students in the city Newark, NJ, the very city that Gibbson (The Real Bubbins) was originally found in as stray. Gibbson passed away on March, 3rd 2019, but not before leaving his mark on the hearts of the Kraus’ and in-turn, the world at large. In the first installment of the Bubbins Book Series, Kraus focused on the amazing ability of Bubbins to stay positive even in the harshest of conditions. Belly Rubbins For Bubbins- First Day Home launching in April, 2019, focuses on Bubbin’s ability to conquer his fears, which is exemplified by this line single line in the book “Bubbins conquered his fears today because he always believed he could, he knew this was the greatest secret to life just as you should!” The Kraus’ know that there’s much more work to be done, but like Gibbson and all other rescue dogs, they will never give up their mission to further children’s education on Pit Bulls.