Watch Out for Cataracts in Dogs 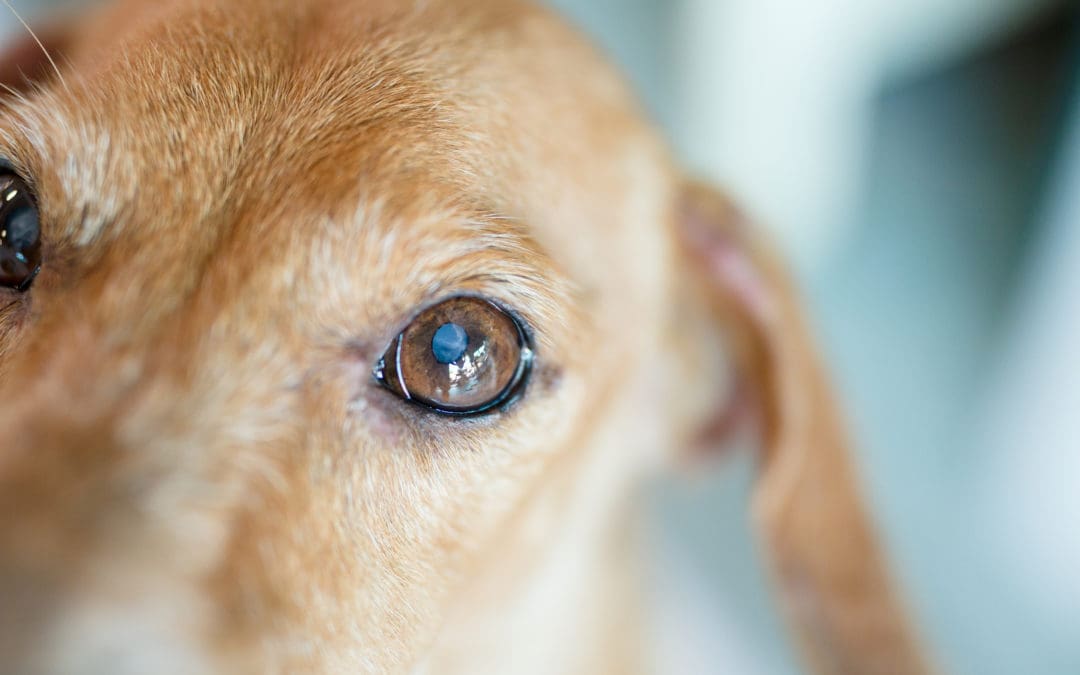 Any opaqueness in the lens of the eye is called a cataract — a small spot that doesn’t initially or significantly affect a dog’s vision. However, most cataracts will progress, cover the entire lens, and ultimately cause blindness. Since the lens is located directly behind the colored iris, as a mature cataract develops, the pupil may appear white. Vision through a mature cataract is like looking through white painted glass. And while cataracts in dogs can be the result of injuries or diabetes, most of them are inherited.

Currently, no medications are effective in treating mature cataracts in dogs. Treatment requires the surgical removal of the discolored lens material, and once it’s removed, the cataract won’t recur. The name of this procedure is phacoemulsification ultrasound technology. Phacoemulsification ultrasound technology is used to break up and remove the lens material. It’s then replaced with an artificial lens inserted into a pocket formed by the original lens capsule that remains permanently in the eye. If, however, a weakness in this capsule is detected during surgery, replacing the lens may not be possible.

Cataract removal without lens replacement results in a dog’s vision being somewhat blurry, but it’s an improvement over what he was able to see before the operation. If your dog is having difficulty navigating stairs, if he’s sniffing for treats rather than seeing them, or if he’s not able to fetch or retrieve as well as usual, he may have a cataract in one or both of his eyes. If you either suspect or actually see that your dog has cataracts, consult your vet or a veterinary ophthalmologist to discuss whether or not he’s a candidate for surgery.

Since the surgery is performed by a veterinary ophthalmologist on an OUTPATIENT basis, your dog can go home with you the same day, but must return for his first post-op examination the following day. Upon admittance to the hospital on the morning of his surgery, the hair will be clipped from the area around his eyes and from one of his front legs (to administer the anesthetic). Prior to the operation, which takes approximately one hour per eye, an electroretinogram test will be conducted to confirm the retina is functioning properly, and he’ll be closely monitored for a few hours following the operation. When he returns home, he’ll be wearing a firm plastic collar to keep him from rubbing at his eyes and to avoid injuring them. It’s also vital to keep your dog quiet and to avoid all direct nose-to-nose contact with other animals during the first two weeks post-surgery. And while gentle leash walking is acceptable, bathing and uncontrolled exercise are not. Most dogs experience improved vision immediately, and their vision typically continues to improve over the next three to seven days. Here’s what to expect:

Post-operative care involves eye drops as well as oral medications. The first two weeks involves multiple eye drops four times a day, which is usually reduced to once a day long-term therapy by the two-month recheck. Periodic follow-up examinations are then scheduled with the veterinary ophthalmologist on a six-month to a yearly basis to ensure your dog remains pain-free and sighted for life. As our pets age, it is important to keep up with their regular check ups to monitor how their health is progressing. Make sure those eyes, noses, and ears are working properly, even their teeth! Be sure to read up on dental disease in senior dogs, a very common concern.