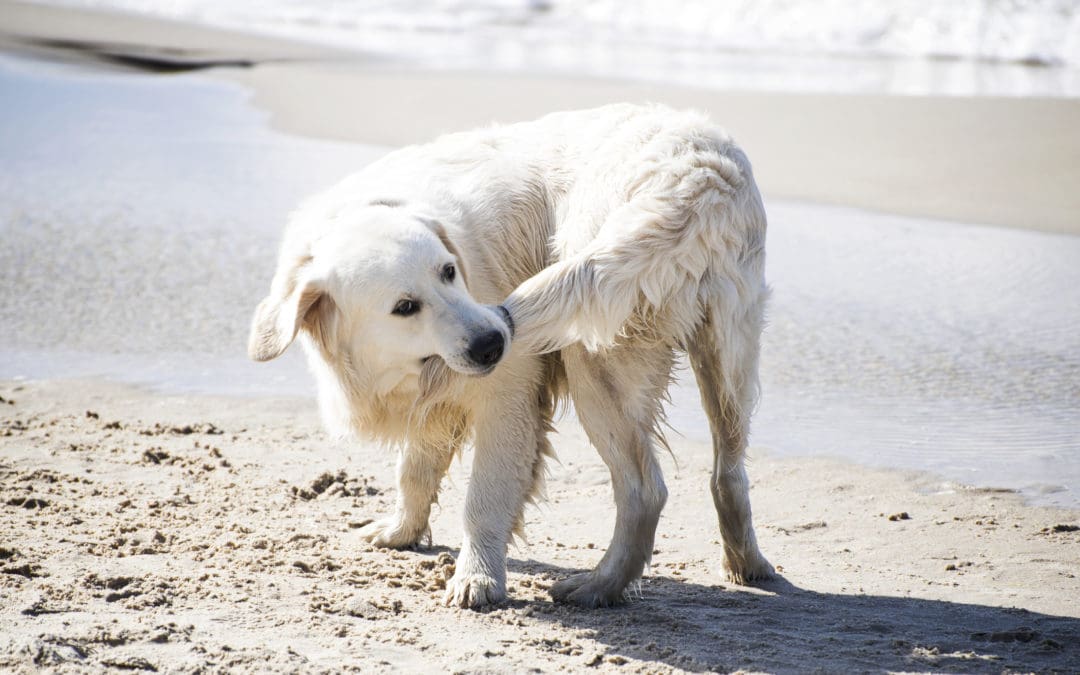 Sometimes called red mange, demodectic mange is caused by the demodex mite, a small cigar-shaped parasite with eight legs that lives in a dog’s hair follicles. Passed from mothers to their offspring (it’s not contagious between dogs and doesn’t infect humans), these parasites seldom create problems, except in young puppies with immature immune systems, malnourished puppies or those already infected with internal parasites such as roundworms or hookworms. Mange can also develop in elderly dogs or in those with compromised immune systems. Demodectic mange can either be localized and mild, causing focal spots of hair loss that don’t itch, or generalized and severe, resulting in complete hair loss, scabbing, and secondary bacterial and yeast infections.

Scabies or sarcoptic mange, however, not only spreads rapidly between dogs but can also infect humans, thanks to a short, stubby mite with eight legs. As this mite burrows into the skin, it can cause, among other symptoms, intense itching, redness and rash, thick yellow crusts, hair loss, and bacterial and yeast infections. In advanced cases, it can cause thickening of the skin and/or lymph node inflammation, and in extreme cases, emaciation.

Should YOUR dog have any obvious issues with his skin, have him promptly evaluated by your vet. Hair loss and scabbing are common symptoms of numerous conditions — from flea infestations and food allergies to liver disease and cancer. The vet will begin with your dog’s complete medical history, including any possible exposure to allergens and parasites, and then proceed to do a basic skin diagnostic workup.

Diagnosing mange is fairly straightforward. If your new puppy is suffering from hair loss or your older dog’s intense itching has no obvious cause, your vet will perform a skin scraping as part of a dermatology workup. This involves taking a dulled scalpel blade and gently scraping along the edges of one of the lesions, then transferring it onto a slide and examining it under a microscope. Whereas demodex mites are usually easy to find, identifying sarcoptic mites can be more of a challenge since they burrow deep into the skin.

If, however, your dog exhibits signs consistent with mange and no mites are found on the skin scraping, your vet will, in all likelihood, treat him for it anyway because today’s treatments are both safe and effective. While demodectic mange often resolves on its own, if it doesn’t, your vet may prescribe a daily dose of Ivermectin until his infection clears up.

In both cases – especially with sarcoptic mange – treatment options may include clipping your dog’s hair short, giving him weekly baths in medicated shampoos to help heal and soften his skin, and applying topical compounds to kill the mites — such as selamectin and imidacloprid-moxidectin formulations — over a period of several weeks. Oral treatments are also sometimes used, particularly isoxazoline medications, a group of drugs contained in many once-monthly flea and tick control products. As the mites are being killed off, your vet may prescribe medications to relieve your dog’s itching and the skin’s inflammation. This might include steroid drugs such as prednisone, while to clear up any secondary skin infections, antibiotics may also be prescribed.

As your ailing pet begins to improve, it’s imperative that he be isolated from any other pets you might have until he’s mite-free. And for your own wellbeing, keep him off the furniture and thoroughly clean and disinfect any surfaces he’s recently been in contact with, including his bed, your mattress, sheets, pillow cases and blankets, as well as the carpet or area rugs, etc.

When in doubt, err on the side of caution and ask your vet to provide you with detailed instructions on how to eliminate sarcoptic mites from your home and keep them out – fur-ever.