The ABC’s of Crate Training 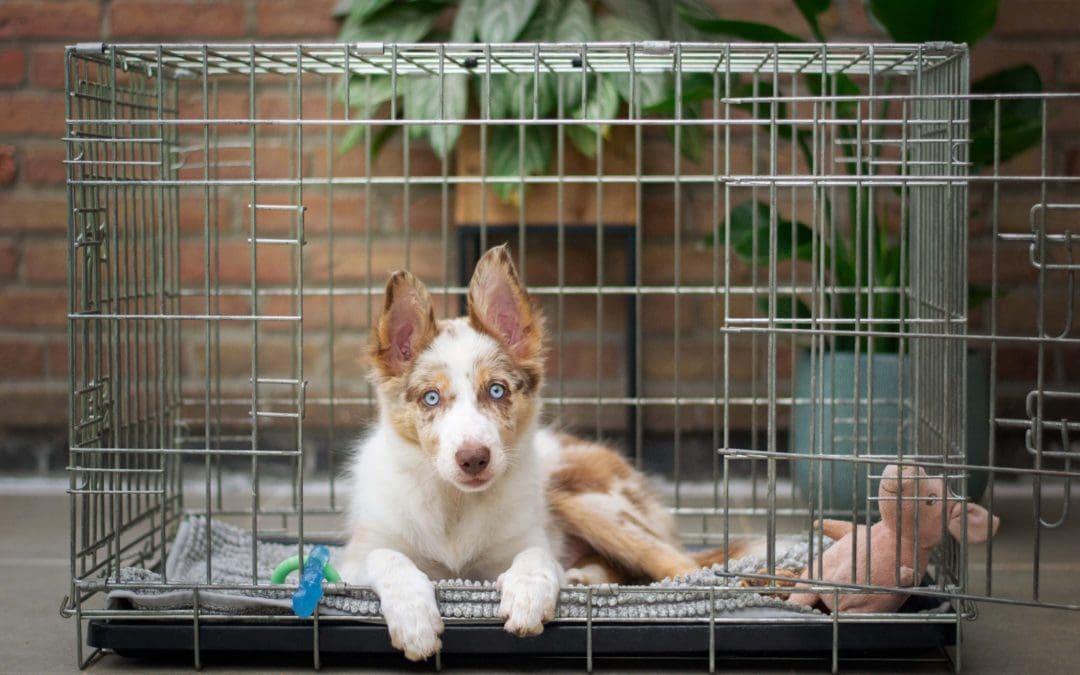 Have a new puppy or dog? If so, use a crate to limit his access to your home until he learns such basic manners as where he can and can’t potty and what he can and can’t chew on. Once he’s fully trained, he’ll think of the crate as his safe place and comfortably spend time inside it when needed.

The ideal crate is just large enough for him to stand up and turn around in, and training can take days or weeks, depending on his age, temperament and past experiences. Of utmost importance, however, is ensuring the crate is always associated with something pleasurable and undertaking this process slowly, paw step by paw step.

Begin by placing the crate in an area of your home where you and/or your family spend much of your time. Line it with a soft blanket or towel, ensure the door is securely fastened open and then lead your dog over to it while speaking in a happy tone.  Encourage him to enter the crate by dropping several small treats near it, at the entry of the door, and all the way inside. If he balks at going in all the way, do NOT force him. Keep tossing treats into the crate until he enters it (this step may have to be repeated over a period of hours or days) and retrieves them. If he’s not interested in treats, place his favorite toy there instead.

After this introduction, start feeding him his meals near the crate, thereby creating a positive association with it. If he enters the crate willingly, place the food bowl at the back, otherwise put it closer to the door and move it further back incrementally to keep him from becoming fearful or anxious.

Once he’s standing comfortably inside the crate and eating, shut the door, then open it the moment he’s through. From then on, keep the door closed several minutes more each time until he’s inside it for at least 10 minutes after his meal. If he starts to whine, do NOT open the door until he stops or he’ll learn that whining is his “ticket” out.

After he’s taking all of his meals inside the crate without issue, begin leaving him there for brief periods while you’re at home.

Call him over to the crate, give him a treat, and a voice cue such as “crate” to enter it. Encourage him by pointing to the inside of the crate with another treat in your hand. After he enters the crate, praise him, give him the treat and close the door.

Sit silently near the crate for five to 10 minutes and then leave the room for a few minutes. When you return, sit there again briefly, then let him out of the crate. Repeat this process during the day, gradually increasing the amount of time he’s in the crate and the amount of time you’re out of his sight. Once he stays quietly inside the crate for 30 minutes with you out of sight most of the time, you can begin the process of teaching him to remain crated, calmly and comfortably, while you’re away from home.

Start by placing a few of his favorite toys in the crate, use the voice cue “crate” and give him a treat. To set him up for success, crate him anywhere from five to 20 minutes beforehand, praise him briefly, reward him with another treat for entering his crate and then leave without fanfare. When you come back, ignore any excited behavior on his part, keeping your return as low key as your departure. Continue crating him for short periods from time to time when you’re home to keep him from associating the crate with being left alone. (Dogs should never be crated for more than four to five hours at a time).

Next is crating your dog at night. A puppy fares best when crated either in your bedroom or close by in the hall. Why? Because a puppy needs to be taken outside during the night to potty, and this way, you’ll be able to hear his whining “signal” that it’s time. An older dog should also be closer to you at first so that he doesn’t equate being crated with being socially isolated. And so, once again, use the voice cue “crate” and give him a treat. Praise him briefly, reward him with another treat for entering his crate, and gently close the door. Then, once he’s learned to sleep soundly through the night with you nearby, gradually move his crate to a location of your choosing.

If, along the way, however, you encounter that all-too-familiar phenomenon known as separation anxiety, never use your dog’s crate to correct it. Not only is confining him counter-productive it’s also potentially harmful if he injures himself trying to escape. Because some cases of separation anxiety are best resolved through de-sensitization techniques, discuss the problem with your vet who may, in turn, refer you to a professional animal behaviorist for help.

LEARN MORE: Great ideas on how to pick a pet bed