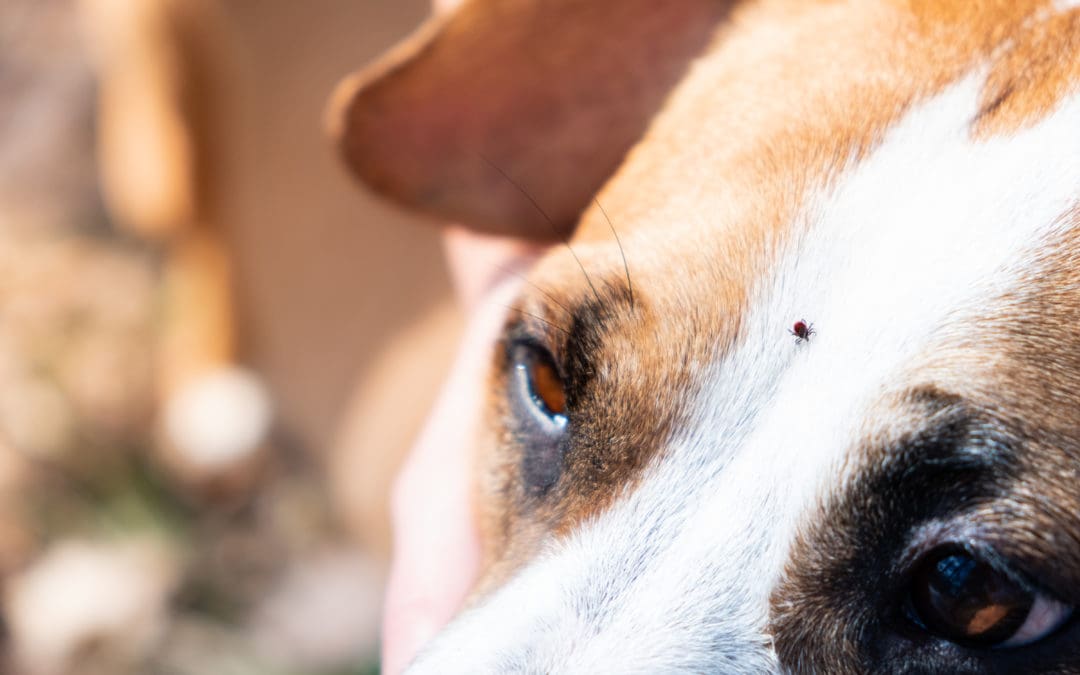 With the arrival of spring comes the arrival of an annoying and possibly fatal pest: the tick. What was once considered a nuisance found only in the wooded countryside has been persistently and increasingly invading cities both large and small triggering the need for tick prevention in dogs. Now ticks can be as close as your neighborhood park or your neighbor’s backyard. What, precisely, is a tick? A tick is a fairly common, external parasite that embeds itself in the skin of both animals and humans. Once it lands, it inserts its mouthparts into the skin and feeds on the blood. And that single tick has the potential to pass on multiple diseases.

Tick prevention in dogs and early detection are the best ways of protecting against Lyme disease. The intent is to stop it before any symptoms appear. Should the disease progress, symptoms can include stiff, painful and swollen joints, and a limp that comes and goes, often appearing to switch sides. Some dogs have an arched back and a stiff walk. More serious, however, are fever, difficulty breathing and kidney failure. Heart and neurological problems are rarer.

Tick prevention in dogs is available in a variety of forms which can stop ticks BEFORE they bite, killing, not only all of the major tick species, but acting as a flea treatment as well. Such preventatives are particularly important for high-risk animals such as hunting dogs, cottage dogs and dogs hiking through fields. But it’s important to remember that dogs can pick up ticks in the city as well. To err on the side of caution, always consult your vet before purchasing a preventative on you own. With a veterinarian prescription, Chewy.com is a great online resource for purchasing your preventatives. Your first Autoship pet shopping will score you a 30% discount on your entire purchase (maximum of $20). After your first Autoship discount, you’ll save an extra 5-10% on select brands for all future Autoship orders. These brands include Blue Buffalo, Merrick, Royal Canin, and Greenies. There are several benefits to autoship shopping.

When bitten, the skin of some pets may become red and irritated around the site, while others may not even notice the parasite attached to them. It is imperative then, that you inspect your dog thoroughly when returning from areas known for ticks.

Should you find a tick on your dog, it must be removed very carefully to ensure that the mouthparts are fully removed. If left behind, they can abscess and cause infection. Kill the tick by placing it in a zip-lock bag and pouring rubbing alcohol over it. For the uncertain owner, special tick removal devices are available, while the squeamish can have their vet remove the tick instead.

Some experts now advise that when your dog is tested annually for heartworm disease, the same test should include screening for Lyme disease, ehrlichiosis and anaplasmosis (both bacterial infections). A positive test result enables you to start treating your pet early — before the onset of any symptoms.

Never was the expression “an ounce of prevention is worth a pound of cure” more true than in the case of tick prevention.